Balerion in the War of Conquest ©HBO.

Balerion was eventually claimed by Lord Aegon Targaryen, some time before he married his sisters Visenya and Rhaenys.[17] Aegon became involved in the wars in the Disputed Lands when Pentos and Tyrosh approached him, inviting him to join a grand alliance against Volantis, and he chose to heed their call. Mounting Balerion, he flew east to meet the Prince of Pentos and the magisters of the Free City, then flew to Lys in time to set ablaze a Volantene fleet trying to take the city.[16][18]

征服期间它获得了“黑死神”的称号，征服者伊耿亲自骑着它征讨七大王国。在伊耿的第一场考验中，伊耿从天而降，杀死了慕顿大人和达克林大人。接着，伊耿带着贝勒里恩到了赫伦堡，黑心王 Harren Hoare 躲在他那可怕的堡垒里。 When Hoare had not yielded by sunset, he took Balerion high up and descended inside the castle walls, and put the castle to flame. Balerion's dragonfire burned so hot that the towers of Harrenhal went up like candles, melting and twisting into the shapes they retain to this day. King Harren and his sons all perished, ending the line of House Hoare.[17]

在接下来的怒火燎原之役中，史上惟一一次坦格利安的三条巨龙瓦格哈尔、米拉西斯和贝勒里恩同时出击，它们开展双翼，横扫天际，口吐烈焰，将河湾王孟恩九世连同近四千名士兵烧成灰烬。战局旋即扭转，伊耿取得了战争的胜利。[10][17] When Aegon learned that King Torrhen Stark had crossed the Neck and was leading an army into the riverlands, he raced ahead of his army on Balerion to meet the threat. When the Targaryen host was encamped at one side of the Trident and the northern horst on the other side, Torrhen's bastard brother Brandon Snow offered to assassinate the sleeping dragons. Recalling the destruction the three dragons had caused on the Field of Fire, Torrhen instead submitted to Aegon.[17] 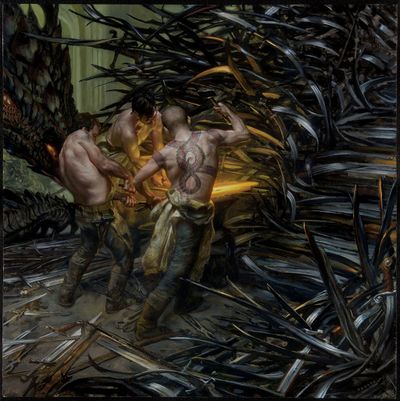 Balerion and workers help forge the Iron Throne, as depicted by Donato Giancola.

Aegon later flew Balerion into battle during the First Dornish War, burning every Dornish stronghold (except Sunspear) at least once during the years of the Dragon's Wroth.[20] 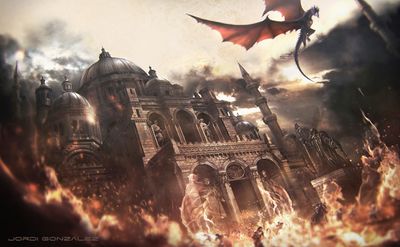 King Maegor I Targaryen and Balerion burn the Sept of Remembrance, by Jordi Gonzalez for The World of Ice & Fire.

在伊耿死后，其子梅葛王子成为了贝勒里恩的主人。梅葛之前并未骑过别的龙，因为他觊觎贝勒里恩已久，觉得其他的龙配不上自己。After Jonos Arryn imprisoned his brother Lord Ronnel and declared himself independent of the Iron Throne, Maegor rode the Black Dread to the Vale and put down his rebellion.[4][3]

When Maegor was exiled to Pentos as punishment for his polygamous marriage, he took Balerion with him. After his brother King Aenys I died, Maegor flew back to Westeros on Balerion to claim the Iron Throne. 当他称王期间，梅葛在焚烧思怀圣堂和讨伐教团武装起事叛军时都骑着贝勒里恩。In the Battle Beneath the Gods Eye, Maegor used Balerion to kill his nephew Prince Aegon and his dragon Quicksilver.[21] After Maegor's death, Balerion returned to Dragonstone, where he made his lair.[15]

Balerion was claimed as a dragon by Princess Aerea Targaryen in late 54AC. They disappeared and went missing for more than a year. King Jaehaerys I Targaryen sent expeditions to try and locate Balerion and the young princess, and the master of coin, Rego Draz, offered a reward for any information on their whereabouts, but none came forward that were credible. Balerion was the largest living dragon in the world, but there were no sightings of the dragon anywhere. Septon Barth believed that the lack of sightings suggested that Balerion was no longer in Westeros.[5]

Balerion returned to King's Landing in 56AC, descending into the courtyard of the Red Keep with Aerea barely clinging to him. The princess was severely ill, and died soon after. Barth's accounts describe wounds and half-healed scars on Balerion. The dragon bore a huge jagged rent down his left side, almost nine feet long, and fresh blood still dripped from the wound, hot and smoking. Barth speculated that, when Aerea claimed Balerion, she was unable to bend the dragon to her will, and instead the dragon had taken her to the place he had been born, Valyria. Shortly thereafter, Balerion became the first dragon to be housed in the Dragonpit, where he was guarded by the Dragonkeepers.[15]

贝勒里恩继续住在龙穴中。Balerion remained at the Dragonpit. Young Prince Baelon Targaryen smacked Balerion on his snout the first time the boy entered the Dragonpit.[15] When Princess Alyssa Targaryen came to the Dragonpit to claim a dragon of her own in 75AC, the Dragonkeepers persuaded her not to try and claim Balerion, insisting that the dragon had become old and slow, suggesting to her that she would much more prefer a faster dragon.[14]

93AC，韦赛里斯王子进入龙穴，成为了贝勒里恩的最后一位驭龙者。 Balerion was hard to rouse, and struggled when Viserys urged him into the sky. They flew around King's Landing three times, although Viserys later confided to his father that he had originally intended to fly Balerion to Dragonstone. However, fearing the dragon lacked the strength to do so, Viserys had opted otherwise.[14] 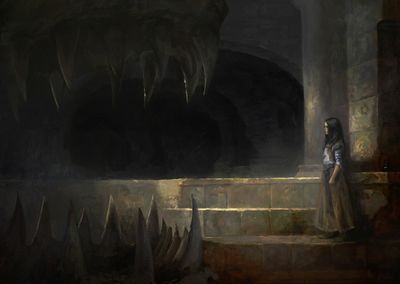 Arya Stark encounters the skull of Balerion the Black Dread, by Justin Sweet for The World of Ice & Fire.

Along with eighteen[10] other Targaryen dragon skulls, Balerion's skull hung on a wall in the Red Keep's throne room.[22][23] After Robert's Rebellion, King Robert I Baratheon had the skulls removed from the throne room, and stored them in a dank cellar. In 284AC, when Tyrion Lannister visited the capital for the wedding of his sister Cersei to Robert, he observed the skulls in the cellar, including Balerion's.[10] In 298AC, Arya Stark encountered the dragon skulls while passing through the Red Keep cellars.[24][25]

In 299AC, Daenerys Targaryen had the three ships sent to her by Illyrio Mopatis renamed Vhagar, Meraxes, and Balerion, to tell the world that the dragons had returned.[26]

There is a rather nice picture of Balerion the Black Dread, done in colored inks, in the book Dragonkin, Being a History of House Targaryen from Exile to Apotheosis, with a Consideration of the Life and Death of Dragons, written by Maester Thomax.[27]