Grey Worm is a recurring character in the third, fourth, fifth and sixth seasons. He is played by Jacob Anderson and debuts in "Kissed by Fire". Grey Worm is the chosen commander of the Unsullied, the warrior-eunuchs of Astapor whose reputation for combat is without equal.

Grey Worm became one of the main advisors to Daenerys Targaryen after she acquires the Unsullied from the Masters of Astapor. He participates in the sack of Astapor, inflitrated Yunkai and led the liberation of Meereen.  During the subsequent resistance movement by the Sons of the Harpy, Grey Worm is severely injured in an ambush. After Daenerys leaves Meereen on the back of her dragon, Drogon, Grey Worm remains in Meereen to support Tyrion Lannister's rule of the city while Jorah Mormont and Daario Naharis track down the missing queen.

Like all Unsullied, Grey Worm's castration as a boy resulted in changes to his body's hormones, so he is smooth-cheeked with absolutely no facial hair.

Grey Worm was originally a boy taken into slavery by the Good Masters of Astapor, an oligarchy of slave-traders dedicated to the training and commerce of Unsullied, warrior-eunuch slaves trained into absolute obedience since early childhood. It later is revealed that he is originally from the Summer Islands and was taken by the slavers in a raid as a baby. He has no memory of his life before being an Unsullied.[1]

He is released from slavery after Daenerys Targaryen buys all the Unsullied in the city and has them put all slave owners in Astapor to the sword and release all slaves. Once released, Grey Worm, like all his brethren, chooses to fight for Daenerys as a free man.[2] Grey Worm presents himself to Daenerys.

As per Daenerys's instructions, the Unsullied officers select their own leader to act as their official commander, reporting directly to her. Grey Worm is selected, though it is not established how. Upon reporting his election to Daenerys, she finds his name and its associated practice– given to him by the Good Masters to remind him that he is vermin– distasteful, and tells him that he and all Unsullied may use their original names or chose new ones they like. Grey Worm agrees to disseminate the instructions to the other Unsullied, but chooses to keep his. He considers that his birth name was cursed as he had it when was taken as a slave, while "Grey Worm" is a lucky name as it was the one he had when Daenerys Stormborn set him free.[3]

After Daenerys and her army set camp a short distance from Yunkai, Daenerys has Grey Worm send a man to the Yunkish gates to deliver a message to the Wise Masters: she will receive them in her camp to accept their surrender.[4]

Grey Worm is present when Daenerys hosts the captains of the Second Sons, Mero and Prendahl na Ghezn, and their lieutenant Daario Naharis. Grey Worm is highly offended by Mero's boorish and insulting behavior towards Daenerys and Missandei, and offers - in Low Valyrian - to remove Mero's tongue as punishment, reaching for the bronze dagger in his belt. Daenerys graciously has him stand down.[5]

Grey Worm is present when Jorah Mormont and Daario plan the infiltration of Yunkai. Grey Worm remains silent throughout most of the meeting, until Daenerys asks for his opinion of Daario. Grey Worm is not used to having his own opinions, but Daenerys gently encourages him by saying that he is a leader now, and he responds that he trusts him. Daenerys sends the three to sneak into the city. Grey Worm proves himself an artist with his spear, easily besting dozens of Yunkish guards. He returns to his queen battered but uninjured at the end of the night.[6] 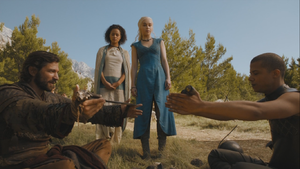 Grey Worm gambling with Daario Naharis.
Ser Barristan and Missandei reveal that Grey Worm and Daario have been indulging in a bit of gambling: they have been at the contest since midnight and have missed a morning meeting with the queen as a result. Daenerys is very irritated to discover that their contest is a game of who can balance their sword for the longest, the prize being the honor of riding at her side when the march resumes. Daenerys assigns the pair to guard the livestock as punishment for their childish game. When they fail to move, she casually warns them that the "winner" of the contest must find a new queen, prompting them to drop their weapons instantly. Grey Worm's gaze lingers on Missandei, which Daario takes as a sign that he is interested in her, and points out that this problematic given Grey Worm's eunuch status. Grey Worm tells Daario that he is not a smart man for saying such things.[7]

At the gates of Meereen, Grey Worm asks to be allowed to kill the city's champion for Daenerys. The queen declines as she is unwilling to risk her army's official commander.[8] 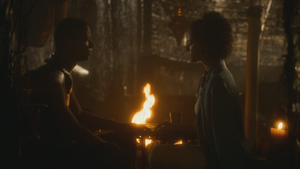 Grey Worm talking to Missandei.
Missandei is revealed to have been teaching Grey Worm the Common Tongue. As the lessons progress, Missandei and Grey Worm discuss their lost homelands (Naath and the Summer Isles respectively) and Grey Worm's eagerness to kill the Masters of Slaver's Bay. Daenerys interrupts them to dispatch Grey Worm on a mission of subterfuge: he is to sneak into Meereen and arm the slaves there. Grey Worm and his team successfully slip in through the sewers and convince the slaves to rise up, ensuring the city is taken from within.[9]

While swimming, Grey Worm notices Missandei bathing naked with other women down the stream, and gazes at her intently. She notices this, and stands up slowly to let him view her before finally covering herself. Later he apologizes if he made her uncomfortable, and Missandei assures him he did not. It is made apparent that some sexual desire may still reside in him, even with his castration, and Missandei is not averse to his interest, later speculating with Daenerys as to "how much" the masters took from him. Grey Worm is later present when Jorah Mormont is banished from Daenerys's service.[10]

Grey Worm is on hand when Daenerys learns that Drogon has killed a three year old girl. He later reports that Drogon is not actually in Meereen.[11] 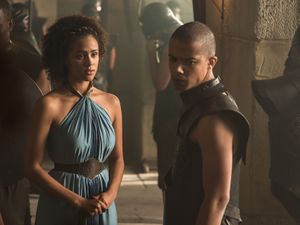 Grey Worm reports to Daenerys when an Unsullied soldier named White Rat is murdered while visiting a brothel. Later, he is approached by Missandei, who asks him why an Unsullied would want to visit a brothel. Grey Worm states that he does not know and leaves.[12] 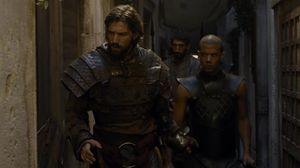 Daario and Grey Worm track down a Son of the Harpy.

Grey Worm, with the help of Daario Naharis, successfully track down and arrest a Son of the Harpy involved in White Rat's murder. Daario teaches Grey Worm that his Second Sons are less conspicuous than the Unsullied, making them much better at tracking down elusive Sons of the Harpy. After, Grey Worm is at Daenerys's council when they discuss what should be done with the Son of the Harpy who has been arrested. Later, he is present when Mossador is publicly executed for murdering the prisoner before a fair trial could take place. Grey Worm leads the Unsullied who escort Daenerys and her retainers away when a riot breaks out.[13]

Grey Worm is patrolling the streets of Meereen with other Unsullied when they discover that the Sons of the Harpy have murdered several individuals in broad daylight. The same prostitute that lured White Rat to his death directs Grey Worm and his Unsullied into a trap, where they are surrounded by Sons of the Harpy. The Unsullied are overwhelmed by their sheer numbers and are brutally murdered. Grey Worm, despite taking numerous wounds, kills several of his attackers until he is the last Unsullied left alive. Just as the Sons of the Harpy close in around him, Ser Barristan Selmy arrives and manages to draw most of them away from Grey Worm. Barristan fights valiantly, but ultimately succumbs to the Sons of the Harpy's attacks. Before a Son of the Harpy can cut Barristan's throat, Grey Worm manages to kill him before collapsing from his wounds next to the dead knight.[14]

Grey Worm ultimately survives his injuries, but is incapacitated and confined to a bed. He is accosted by Missandei, and admits to her his shame for letting Barristan Selmy die and failing Daenerys, and for feeling fear when he believed he was going to die, not for his life, but because of the possibility of never seeing her again. Missandei, touched by Grey Worm's words, kisses him.[15]

Grey Worm is charged with enforcing Tyrion's rule over Meereen.

In the aftermath of the attack by the Sons of the Harpy at Daznak's Pit and Daenerys' disappearance on Drogon, Missandei brings Grey Worm – still recovering from his injuries – to a meeting of Daenerys's advisors, which now includes Tyrion Lannister. They decide that Jorah (who had returned to the city with Tyrion) and Daario would find Daenerys and Tyrion would rule in Meereen in her stead. Grey Worm volunteers to help Jorah and Daario look for Daenerys, but they tell him to remain in the city with Missandei, as he is the only one who can lead the Unsullied in keeping the peace and enforcing Tyrion's rule over Meereen.[16]

In the A Song of Ice and Fire novels, Grey Worm is a stalwart and skilled warrior. Like all Unsullied, he doesn't have a real name, instead choosing a name every day by lottery from a barrel. The names the slave-masters came up with for them are intentionally demeaning, usually a combination of a color and a kind of vermin. He decides to keep the name Grey Worm as it is the one he had on the day he was freed.

Slaves in Astapor are taken from all over the world, and no indication has been given about where Grey Worm is originally from, or if he even knows where it is. The TV series invented the background that he is from the Summer Islands, but was taken by slavers as a baby, and has no memory of his life before being an Unsullied - though it is entirely plausible that this could be his background in the books.

There is no budding attraction between Grey Worm and Missandei in the books, given that the book version of Missandei is only ten years old. As for the plausibility of such a relationship, just because a eunuch does not feel sexual attraction, this does not prevent him from having human emotional attachments. In the books, some time after Daenerys captures Meereen, an Unsullied called Stalwart Shield is the target of a revenge killing by one of the old slaver families. Daenerys asks how this Unsullied was ambushed alone, given that they patrol the streets in pairs. She is told that Stalwart Shield went off on his own to a brothel, where he was ambushed. Daenerys is confused why a eunuch would visit a prostitute, and Grey Worm himself explains to her that "Even those who lack a man's parts may still have a man's heart." Stalwart Shield simply paid prostitutes to lay with him and hold him lovingly, to feel some sort of basic human affection after a lifetime of brutal debasement at the hands of the slave masters. Also, Grey Worm's friendly rivalry with Daario Naharis is absent in the books.

Grey Worm is never attacked by Sons of the Harpy, though a loved one of Missandei, her own brother, is not only attacked but killed by them. He has not yet met Tyrion Lannister.