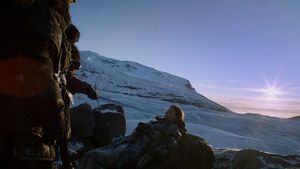 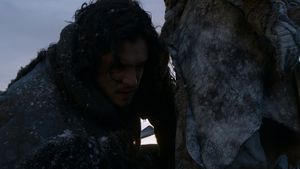 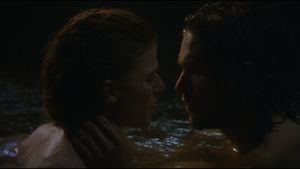 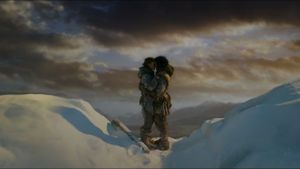 Some time later, as the wildlings ready to climb the wall, Ygritte reveals she is aware that Jon is still loyal to the Night's Watch. She understands that he is an honorable man, but warns him that he has obligations to her as well. While climbing, Ygritte causes a massive crack, which dislodges a large sheet of ice and sends several wildlings to their deaths. She and Jon are left hanging by their safety rope. Orell decides that Tormund cannot continue climbing with the weight of Jon and Ygritte's bodies pulling them down, and begins cutting the rope. Jon barely manages to get a hold in the Wall and saves himself and Ygritte when their rope is severed. They reach the top of the Wall and share a passionate kiss, grateful to be alive after such a narrow escape.[9] 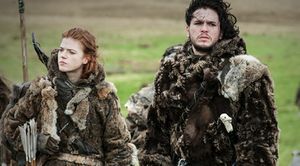 Ygritte, Jon Snow and the wildlings led by Tormund Giantsbane then make their way towards Castle Black to await Mance Rayder's signal to begin the attack on the Night's Watch.[10] Along the way, Ygritte is confronted by Orell, who expresses his distrust of Jon and says he would make a much better husband. However, he is flatly refused. Later, Jon tries to persuade Ygritte that the wildlings' cause is doomed to failure, but she refuses to listen. She tells him that if they die, they die, but before that, they will live. The two kiss passionately.[10]

Later, the wildling party prepares to raid an elderly horse breeder's home. When the party attacks the farmstead, Jon surreptitiously hits a rock with his sword, alerting the old man and giving him the chance to escape. When Ygritte tries to shoot the fleeing man with an arrow, Jon causes her to miss.[11] 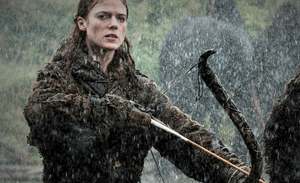 The old man is later caught in an abandonded windmill. Outside the mill, Orell suggests that Jon prove himself to the wildlings by killing the man himself. Jon is ultimately unable to kill an innocent, and Ygritte shoots him for Jon. Realizing that Jon is still loyal to the Night's Watch, Tormund orders his men to kill the Crow. He also restrains Ygritte to stop her from "getting [herself] killed" for her lover's sake. Jon defeats Tormund's men and escapes, leaving Ygritte and heading back to the Wall.[11]

When he stops to rest, however, Ygritte catches up to him and, despite his attempts to talk her out of it, shoots him three times before he can get away. She watches him ride away with tears in her eyes, regretting his betrayal of her and also that she could not bring herself to kill the man she loved.[12] 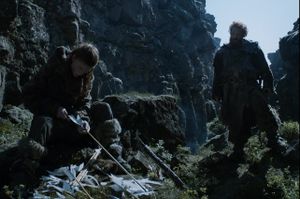 Now awaiting Mance's signal south of the Wall, Ygritte and Tormund rest. Despite wanting revenge for his betrayal, Ygritte still loves Jon, a fact that Tormund picks up on. Ygritte insists that all three arrows found their mark, but says that Jon may still have survived. Knowing Ygritte's skill as a markswoman, Tormund says that if Jon is still alive, it is because she didn't want him dead. A group of Thenns led by Styr arrives, bearing food from a raid farther south. When Styr asks if Ygritte is Tormund's woman, she claims that she belongs to no one and points a threatening arrow at the Thenn leader. He ignores it and takes a seat next to the fire to cook his meat: a human arm.[13] 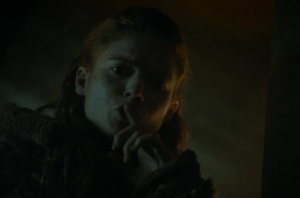 Ygritte spares Gilly and Sam's lives during the sack of Mole's Town.

Ygritte and the wildling band attack a village and kill almost all of its inhabitants. She kills one villager with an arrow, whose son Styr orders to run to Castle Black to warn the Night's Watch about the impending attack, in the hopes that the brothers would leave Castle Black to protect nearby villages.[14]

Ygritte participates in the attack on Mole's Town. She is ambushed by a whore in the Mole's Town brothel, but swiftly kills her with a spear thrust into her gut. Ygritte then discovers Gilly and her son in hiding, but spares their lives and motions for them to be quiet so they will not be found by other and less merciful wildlings.[15] 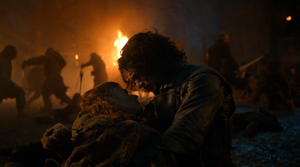 Just outside Castle Black, Ygritte gets into a heated argument with Styr over her feelings for Jon, motivating her to resolve to kill him herself and reestablish her tarnished reputation among her own people. The wildlings then see Mance Rayder's bonfire signal to attack Castle Black. Ygritte scouts Castle Black's defenses and reports back that most of the men are on the Wall and few remain in the Castle. The group prepares to attack, while Ygritte seems to have second thoughts. During the battle, she kills numerous brothers of the Night's Watch, including Pypar. Cornering Jon Snow, Ygritte aims an arrow at him. Seeing him and speaking to him weakens her resolve and she hesitates, only to have Olly shoot her through the chest from behind. Jon holds her in his arms, and she weakly asks if he remembers the cave where they made love - where she said she wished they could stay forever and not have to face the war and death outside. Ygritte says they should have stayed in that cave, and then dies.[16] 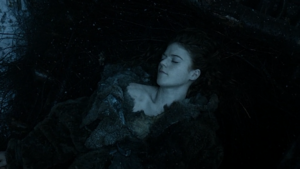 Ygritte's body being prepared for her funeral pyre.

After the arrival of Stannis Baratheon at the Wall, Jon speaks with Tormund, who is now a captive of the Night's Watch. Tormund asks Jon if he loved Ygritte, and, when Jon does not respond, says that she loved him very much, as the only thing she talked about after Jon left her, was killing him. He convinces Jon to have her body burned beyond the Wall. Thus, Jon takes Ygritte's body to a grove in the Haunted Forest and makes a funeral pyre before a weirwood tree, burning his love's body with tears in his eyes.[17]

Ser Davos Seaworth mentions to Jon that he and several black brothers witnessed him take Ygritte's body beyond the Wall, which has led many in the Night's Watch to believe that Jon has grown to feel sympathy for the wildlings.[18] Later, during the choosing for a new Lord Commander of the Night's Watch, Alliser Thorne cites Jon's affair with Ygritte as a reason not to vote for him as a candidate.[19]

When Melisandre attempts to seduce Jon Snow, he rejects her advances. Although Ygritte is long dead, Jon still loves her and cannot bring himself to sleep with another woman. Melisandre apparently senses this within Jon, and as she leaves, she quotes Ygritte by telling him, "You know nothing, Jon Snow."[20]

In the A Song of Ice and Fire novels, Ygritte is described as skinny but well-muscled, with a round face, crooked teeth, and a slightly upturned nose. She does not have the flawless features of noblewomen in courts south of the Wall, but Jon thinks that she is still quite beautiful in her own way, with a smile that lights up her face. Her most distinctive feature is her hair, fiery red and "a tangle of curls". The wildlings consider redheads to be "kissed by fire", a sign of special significance and luck.

When a wildling man wants a wife (wildling or non-wildling), he must kidnap her, while risking severe injury or even death by the woman and her relatives, and the woman must fight back. As a rule, the wildlings do not kidnap married women. Ygritte explained to Jon that if the man succeeds, it shows that he is strong, brave and cunning, and this is what wildling women seek in men. If the man turns out to be an abusive husband, the wife can always slit his throat. Because Jon succeeded in chasing down and capturing Ygritte, and later had sex with her, she subsequently points out to him that they could be considered technically married (according to loose wildling customs, which are not strictly defined "laws"), although Jon insists that capturing her was not for sex.

At first Jon rejects Ygritte's advances, not only due to his vows, but also since he does not wish to dishonor her and hurt her feelings, for sooner or later he'd have to abandon her (Sam felt bad about having sex with Gilly for the same reasons). Morever, he may get her pregnant. He discusses this with Tormund, who fails to understand why Jon kidnapped Ygritte if he does not want her. He explains to Jon that there is nothing dishonorable about free folk laying together, and in case Ygritte becomes pregnant - she can drink moon tea or give birth to a strong son or a lively laughing girl kissed by fire, and where's the harm in that? Jon has no answer. Later, when Mance grows suspicious of Jon's true motives, Ygritte assures him that they sleep together. This convinces Mance. Afterwards, Jon has no choice but to have sex with Ygritte.

It wasn't clear who shot the arrow that mortally wounded Ygritte. She was not shot in front of Jon Snow, but when the wildlings and Night's Watch were trading arrow fire back and forth. When Jon found her, for a frantic moment he feared that he was the one who shot her - but when he checked the arrow in her he recognized that the fletching on it was different from the arrows he was using. Ygritte dies in Jon Snow's arms, with essentially the same dialogue as in the TV series. Afterwards, Jon decides that he'd rather not know which of his sworn brothers fired the arrow that killed Ygritte, so he makes no attempt to check.

When Alliser Thorne and Janos Slynt interrogate Jon roughly, they accuse him, among other charges, of oathbreaking by having sex with "the unwashed whore". Jon knows well that many of the sworn brothers often visit the brothel at Mole's Town, and for a moment he ponders claiming that he only did what Qhorin commanded him to do, which was anything he could to gain the wildlings' trust, and that having sex with Ygritte was just part of his ploy. However, he does not want to dishonor Ygritte's memory, so he admits that he truly fell in love with her, even though this angers his superiors further because it is a more serious breach of his vows (even though Ygritte is dead by this point).

When Tormund escorts Jon to Mance's tent, Jon tells him about Ygritte's death. Tormund says sorrowfully "A waste. If I'd been ten years younger, I'd have stolen her meself. That hair she had. Well, the hottest fires burn out quickest". They share Tormund's skin of mead in her memory.

Ygritte's name did not appear in the Season 1 Pronunciation guide, but the phonetic pronunciation of her name was later seen written out in a behind-the-scenes short video: "EE-grit".[22]